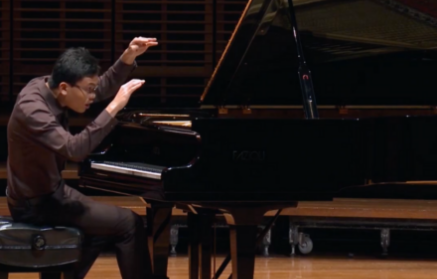 The Sydney is thrilled to present Calvin Abdiel’s Debut Tour, providing a unique opportunity for audiences in Sydney and Canberra to enjoy this prodigious young artist on the cusp of a glistening career.

Calvin Abdiel won the 2021 George Frederick Boyle Third Prize of the Sydney International Piano Competition (The Sydney). The first Australian to reach the grand finale of the competition in almost 20 years, Calvin astounded audiences, who tuned in virtually across Australia and the world, in July 2021. The youngest competitor of the 2021 competition at just 20 years old and competing against 31 other international musicians, Calvin won through the stages of the competition with expertise and skill beyond his years.

The international jury also awarded Calvin Abdiel with the Nancy Weir Best Australian Pianist prize and the prize of an overseas scholarship for an Australian competitor to further their musical career. Calvin Abdiel will perform two programmes on tour, including music by Enrique
Granados, Liszt, Mozart, Schumann, Haydn and Ravel.

Calvin made his orchestral debut in 2017 with the St Petersburg State Capella Symphony Orchestra and subsequent performances with the Queensland Symphony Orchestra and the Swiss orchestra, Les Chambristes. He has performed in Indonesia, Germany, Denmark and Israel.
Calvin studies at the Sydney Conservatorium of Music undertaking his Honours Degree.