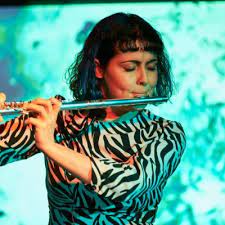 Keyna Wilkins is a leading musician-composer. She was one of three national finalists in the APRA/AMCOS Art Music Awards for Individual Excellence 2018. In her solo shows, Wilkins explores the concept of ad libitum, stream-of-consciousness improvisations alongside her composed pieces, Stylistically broad, inspired by Miles Davis and Debussy in equal measure, her concerts will take you on a journey of impressionistic dream-like sequences alongside landscape depictions, existential philosophical quests alongside whimsical gestures. She has performed her solo show around Australia including Phoenix Central Park, MONA, Sydney Women’s International Jazz Festival, Melbourne Digital Concert Hall, Australian Flute Festival and many other venues. She has released 4 solo albums, So What Bach, Air In Motion, Keys Across The Sky, and Jazz Reverie.

While classically trained in UK, Germany and Sydney Conservatorium, she has branched into jazz, flamenco, live theatre and has studied intuitive conceptual improvisation with Tibetan Buddhist musician Tenzin Cheogyal. She has performed in ensembles and solo around the world.

Passacaglia Nuova is a Baroque Jazz ensemble featuring soprano Roberta Diamond, jazz guitarist Felix Lalanne and improvising double bassist Elsen Price. The trio formed in 2021 with a combined passion for the various styles of Italian, English, and French Baroque music, and the improvising language of jazz.

The trio has performed in Sydney to local acclaim. Individually, the members have led significant careers internationally, giving a broad sense of influence and individuality to some of western music’s most creative works.