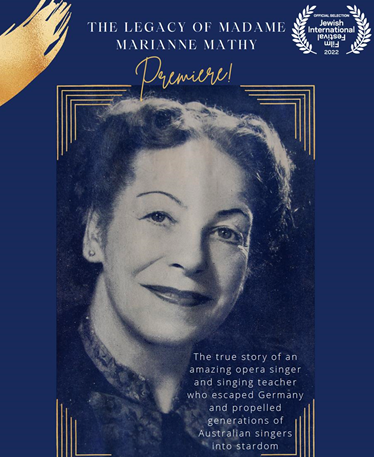 A new Australian documentary The Legacy of Madame Marianne Mathy premieres this evening at the at the Jewish International Film Festival (JIFF), celebrating the remarkable life of a refugee who fled Nazi persecution to become one of Australia’s greatest singing teachers. Madame Mathy’s skill as a tutor and mentor propelled generations of Australian singers to opera theatres and concert platforms across Australia and around the globe. Her generosity gave the world one of its richest singing contests, the Australian Singing Competition which is conducted by the Music and Opera Singers’ Trust (MOST).

The premiere will also feature live entertainment from The Moriah College String Ensemble, bass baritone Sitiveni Talei, a past winner of the Marianne Mathy Scholarship, Eden Shifroni, who aspires to enter the Australian Singing Competition, will sing with her grandfather, Cantor Shimon Farkas OAM and Peter Cousens AM, a former pupil of Marianne Mathy.

Born in 1890 in Mannheim, Germany to musical Jewish parents, Marianne Mathy emigrated to Australia in 1939, in one of the last mass exoduses before Hitler made it impossible for Jews to leave. She went on to train many of Australia’s greatest opera singers, taught for three years at NIDA, and for over twelve years at the Sydney Conservatorium of Music. In 1982, the Australian Singing Competition, which has since become one of the richest prize-winning competitions in the world, was established in her legacy. Australian director Adrian Ussher has filmed the Competition for over twenty years, and weaves this mesmerising footage with interviews with singers influenced by this momentous figure in Australian musical history.

The screening in Sydney will also feature an introduction from Adrian Ussher, Director of the documentary, and Producer and Trustee of Marianne Mathy’s estate, Roland Gridiger OAM.

There will also be a Melbourne screening on Tuesday 22 March, 6:30pm at Classic Cinemas, Elsternwick (alternate pre-screening introduction)