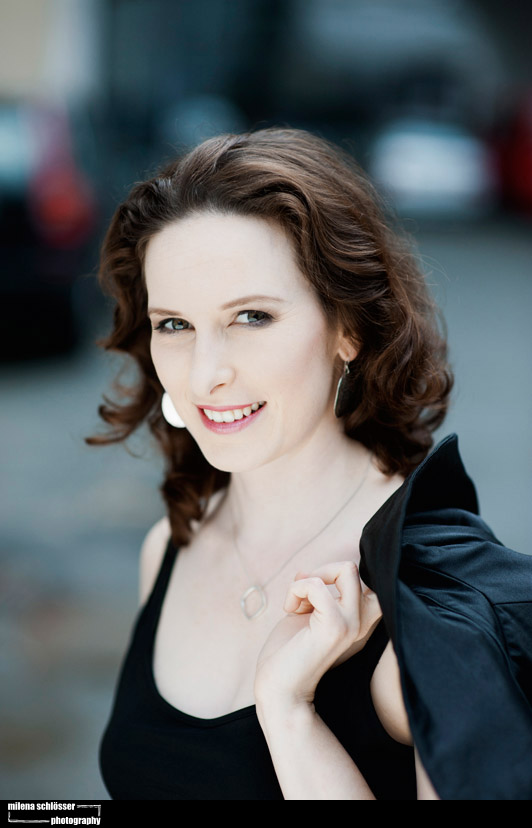 Last week we published the first of a two part interview with emerging conductor Jennifer Condon whose ambition to record Sappho, the forgotten final opera by Peggy Glanville-Hicks has propelled her into the spotlight and into history. Navigating the hurdles, she has landed on the rostrum feet first. The recording was completed last July. In it, she conducts Lisbon’s Gulbenkian Orchestra and Chorus and a glittering cast of singers, amongst them, Deborah Polaski, Sir John Tomlinson, Wolfgang Koch, Roman Trekel and Scott MacAllister.

The CD is scheduled for release in November 2012 on the Toccata Classics label, timed to celebrate the birth centenary of Glanville-Hicks in December. Part two of this interview examines the broader issues that are a part of the post-production phase.

The first necessity was to find a record label which would release the CD. With the help of Richard Bonynge, Condon spoke to Decca, which manages  Glanville-Hicks’ original publishing label, l’Oiseau- Lyre. They needed sales figures that Condon could not guarantee, but were helpful and directed her to Toccata Classics, run she says, “by a man who is as crazy as I am.” Toccata distinguishes itself by only releasing CDs on which all or part of the material has not been previously recorded. Toccata’s distribution network includes all the relevant nations – Portugal, the UK, Australia, the US, Japan Greece and Germany. If you believe in numerology then you may consider it auspicious that the recording  that celebrates Glanville-Hicks’s birth centenary, will be the company’s  101st release.

Digital music and the opportunity to acquire parts of whole works have revolutionised the way we purchase and listen to music. Are obscure works of substantial length going to be bastardised? ” I’d rather people download individual works and get a taste for the whole” she admits. ” The overture is exquisite, there are fantastic big choruses – there are enough stand alone tracks for people to get an idea of the colours of the opera and maybe gradually listen to the while thing. I think it will help rather than hinder international exposure. If it was a piece that was through composed like Elektra or Salome I’d have more of a problem. Personally, I would rather listen to works in their entirety. For me, the best thing about a 24 hour flight from Hamburg to Sydney is that I can go from the first bar of Das Rheingold to the last bar of Götterdämmerung with meal breaks !”

Ironically there is little planned in Australia to mark the Glanville- Hicks birth centenary.  An observation that is linked with marketing the CD. It would be gratifying if sales reached beyond a niche market. “No one is doing anything for the centenary. There is no grand celebration. It’s sad that there hasn’t been a concerted effort to commemorate the anniversary. “I’m thrilled to be able to pull off something this huge but disappointed that I’m the only one doing it”. The revival of this long dormant opera that was originally written for Maria Callas has not passed entirely un-noticed. Overseas, the UK’s Guardian and the  Hamburg Opera where Condon works as Souffleuse, are organising press  features. Portuguese radio has played a brief excerpt from the recording.

Looking back on the project, Condon is assured that she has absolutely no regrets.  “I would not do anything differently  – except things I can’t change – more years of experience, time and money.”  She admits frankly that the first round of fundraising didn’t meet expectations. However, the door is still open. ” I would certainly hope that if we bring Sappho to the stage on Australian soil  there would be much more support from the governments.  All of the grants I looked at had ineligibility clauses all over the place. There was nothing for recording a project off Australia, nothing for non- residents  and applications for grants need to be lodged so far in advance. I felt blocked at every turn. I hope that having put in the effort myself for the recording that Australia might rally a little bit. It’s every Australian musician’s wish is that there’s a little bit more recognition for what we do. One feels like a second class citizen.”

Inevitably, Condon would like to see the opera progress to a fully realised stage production. ” I’d love to get a performance together  – and there has been enough interest to chase this. I have almost a complete cast of Australian singers who are eager to do it, schedules permitting.  A co-production would be wonderful and it would enable performances in more than just one city. Companies I have approached have asked me to get in touch once the recoding is done.”  Completing the recording  means that the prospect of a stage production is within reach. Condon is in touch with several directors and companies; she cites operatic powerhouses Stuart  Skelton and Steve Davislim as expressing interest in singing in a stage production; Johan Botha has tossed in the idea of a  production in South Africa.

Coincidentally, 2012 is also the birth centenary (in February) of librettist Lawrence Durrell. Though Durrell’s text is in English, Condon has taken nothing for granted, and with her customary meticulous attention  to detail, searched for an English coach who could blend the global mix of accents into a credible and unaffected delivery. Australian soprano and language coach Eilene Hannan was charged with this responsibility. “I was in Melbourne briefly last year at a rehearsal of Albert Herring for the Victorian opera and for the first time in my life heard sung English the way I like to hear it. There’s a lot to be said for Britten as it should be sung, but I hadn’t heard a modern interpretation of English singing that had been pleasing to my ear without sounding too affected or too relaxed. I’ve never found the balance that I heard in this rehearsal. It is exactly what I wanted done with this piece. ” Having mustered the courage to ask Hannan to be involved in the project, it transpired that she was planning on being in France at the time and was able to be in Lisbon for the recording. Prior to that, Hannan recorded the entire opera spoken on tape and made notes for the singers. “For the accents that we started with it was no mean feat. Some of the singers arrived the day before they had to record and Eilene had less than 24 hours to mix Colorado with Lancashire, Bavarian and a couple of others into something homogenous. What Eileen achieved in that short time frame is just extraordinary.”

Despite undertaking her debut role with an opera in English, Condon admits that she is not a fan of operas that are translated into English. There are cogent reasons for this. “An awful lot is lost translation. In translating opera into English you actually run the risk of alienating people even further, partly because there are very few singers whose diction is so good that you can understand what they’re singing. Almost everyone is looking at the surtitles anyway. I don’t think anything is gained by it, unless you have diction of John Tomlinson for the entire cast.” Relating this to Sappho, she continues ” My big concern about an English  libretto is that it doesn’t sound farcical – even with a Durrell libretto, which is exquisitely written, I was really worried about certain lines sounding absurd. Eileen’s expertise was critical because I wasn’t sure that I had the skill and the experience to not make these lines sound like a caricature”.

Condon’s work as Souffleuse with the Hamburg State Opera literally gives her a box seat in one of the world’s most prestigious opera houses and the opportunity to work closely with the best. Her views are shaped by her experiences. ” My pet hate, anywhere in the world but particularly in Australia is inappropriate casting.  I understand that there are a lot of restrictions that don’t allow the flexibility you have in Europe. But, as far as I can see, there is a generations of singers who are missing.  We’re using my generation and the one above  The  50-65 year olds all seem to be at home, a lot of them teaching, but a lot of them have just vanished.  We’re discarding too much too soon. I’m not suggesting that older singers sing Juliette, but there are roles that older singers can fulfil.  We’ve gone too far in the other direction. It concerns me greatly because you learn so much from the  folk who’ve been on stage for 30 years. They’re not around to pass on their stagecraft. It can’t be taught or learnt from books. You can’t even learn it from your teacher.  The overuse of younger voices concerns me also. I only hear them once a year, so I can hear the difference every time I come back.”

Condon’s closing comments arguably offer a perspective on her single-minded mission to breathe life into Sappho.”I came to music as pianist- it never felt quite right because it was too much about me and what I was doing. The thing I love about conducting and prompting is that it has nothing to do with me – it’s all about the work,  the music and communicating with the people who are making the music. It’s nothing to do with me at all and I really like that.”

Jennifer Condon was interviewed by Shamistha de Soysa for SoundsLikeSydney©

The National Opera Review has delivered cogent and far-reaching recommendations based on astute observations. The operations of Opera Australia, Opera Queensland, the State Opera of South Australia and West Australian Opera have all been scrutinised. In Sydney, it is the activities of Opera Australia that are relevant, where the Review found fewer productions, a narrower… 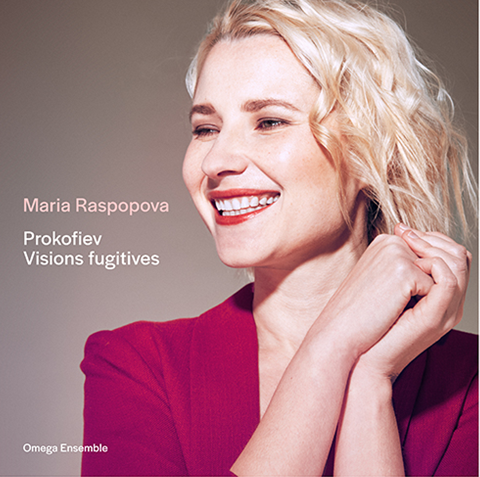 Pianist and Co-Artistic Director of Omega Ensemble Maria Raspopova, has released an album of Prokofiev’s Visions fugitives opus 22. The 20 movement cycle of piano pieces was recorded in May 2018 at the Cranbrook Recording Studio, produced by Philip Powers with recording engineer and mastering by Bob Scott and editing by Jonathan Palmer. Click here to listen/buy

This is a really important feature from theatre critic Jane Howard, writing in The Guardian about the culture of arts criticism in Australia, the loss of “critical dialogue” and a plurality of views. It applies as much to music as it does to the theatre. A recommended read.

This feature from Newsweek, explains why aspiring opera singers gravitate to Germany to pursue their careers. “According to the opera statistics website – Operabase, last year 7,230 opera performances took place in Germany, one third of the world’s total. The United States came a distant second, at 1,730 performances, followed by France and Russia. Austria ranked…

Judging by the nominations for the 2014 Helpmann Awards, the art of opera in Australia is alive and well with Opera Australia, Hobart Baroque and Victorian Opera in the running for at least three awards each. Since their inauguration in 2001, the Helpmann Awards have recognised distinguished artistic achievement and excellence in Australia’s live performance…