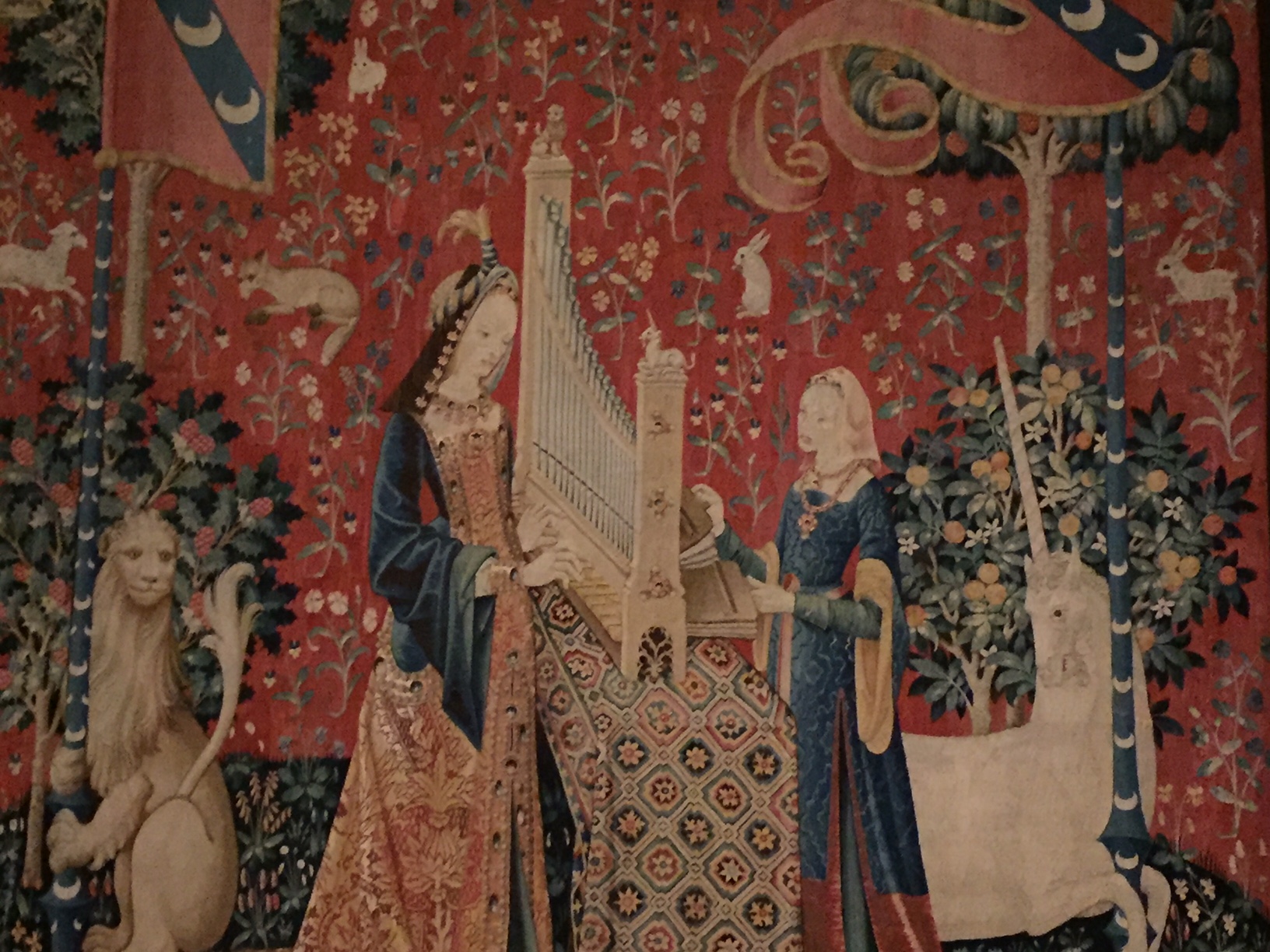 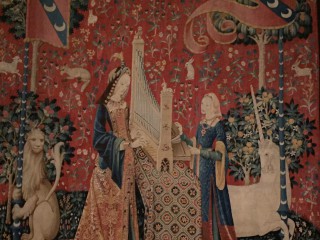 Sydney’s art lovers have been captivated by the six 16th century Flemish tapestries known as The Lady and the Unicorn, on display in the Art Gallery of New South Wales.

Fashioned from wool and silk and recently cleaned and restored, the lissom blonde woman surrounded by her animal companions and ‘thousands’ of flowers in the millefleur style is a silent yet intoxicating depiction of six senses. These heady illustrations of sight, sound, touch, hearing, taste and desire are thought to have been commissioned by a member of the prosperous and noble Le Viste family in Lyon in the late 1400s and created from “cartoons” drawn in Paris. Each tapestry is centred on this likely noblewoman of unknown identity, flanked by a lion and a unicorn. The millefleur background is punctuated by a menagerie of dogs, rabbits, monkeys and birds; the garden is studded with pine, orange, sessile oak and holly trees and a carpet of flowering plants.

But it is the tapestry entitled Hearing which has aroused our interest with its insights into the music of the time as well as its connections with people and events later in time. The lady stands as she plays. The organ is placed on top of a table covered with an exotic rug. Opposite, her companion operates the bellows that power the organ; the casing is intricately carved and adorned with a lion and a unicorn at each end.

It’s a leisurely scene – she is enjoying making her music in her garden, not in the chamber as a recital and not in the church as worship – and she appears to be improvising as there is not a sheet of music in sight.

Experts agree that this is a “positive organ.” The seemingly odd name derives from the Latin “ponere” (to set down or place). Unlike the “portable” organ which typically had just 12 or 13 notes “positives” had 49 notes. Whilst the portable organ was played strapped to the body, the positive organ was larger and required a second person to operate the bellows. The organ appears to have a chromatic keyboard (although all the notes are of the same colour) which extends to over 2 octaves; there are two rows of pipes which are sequentially graded in diameter and height.

But the musical connections of this organ reach beyond its first mention in 1814 when it was found in the Château de Boussac, in central France, 50 km north of Aubusson. In 1841, it was referred to by Prosper Mérimée, the French dramatist, historian, archaeologist and writer. Mérimée is best known for his novella Carmen (1845) on which Bizet based his eponymous opera. Appalled by the way the tapestries were being treated, Mérimée contacted Ludovic Vitet, music critic, politician and author of valuable works on the history of art which fired popular interest in architecture.

Mérimée wrote “All six feature a very beautiful woman … always placed between a lion and a unicorn. There used to be several others at Boussac, finer ones, the mayor tells me, but the former owner of the château … cut them up to cover carts and make rugs out of them,” adding “They will all share the same fate if we do not remove them from Boussac.”

Ironically, it was Vitet’s unrequited love for Maria Malibran early in 1828, combined with his despair at her marriage to the Belgian violinist Charles de Bériot and the French Revolution, which led him to   abandon writing. He turned to politics and the visual arts, and served as General Inspector of Monuments. (1830–34).

This brings us to the involvement of another character from music history. Author George Sand drew attention to the predicament of the collection and their subsequent rescue with her 1844 novel Jeanne, part of which is set in the Château de Boussac and includes members of the Boussac family. She wrote of “those curious enigmatic tapestries…These finely worked scenes are masterpieces and, if I am not mistaken, quite a curious page of history.”

The six tapestries survived to be moved to their present home Paris’ Musée National du Moyen Age, in 1882, then known as the Cluny museum.  Fast forward to the 21th century and the Finnish composer Kaija Saariaho was inspired by the six tapestries to write the six movement clarinet concerto D’om le Vrai Sens (2010) which is an anagram of the tapestry which depicts desire A mon seul désir.

As for its sound, click here to listen to  Dutch organist Jankees Braaksma play a positive organ in the Dutch village of Beerta in March 2010.

Walter Gatti is a concert organist, harpischordist, composer and Artistic Director of the Pinerolo Organ Academy. in Turin and Organist of the Waldensians Church in Turin and its choir. Click here to hear him play Four Toccatas by Pachelbel on a postive organ.

The Lady and the Unicorn resides at the Art Gallery of New South Wales until 24 June 2018. 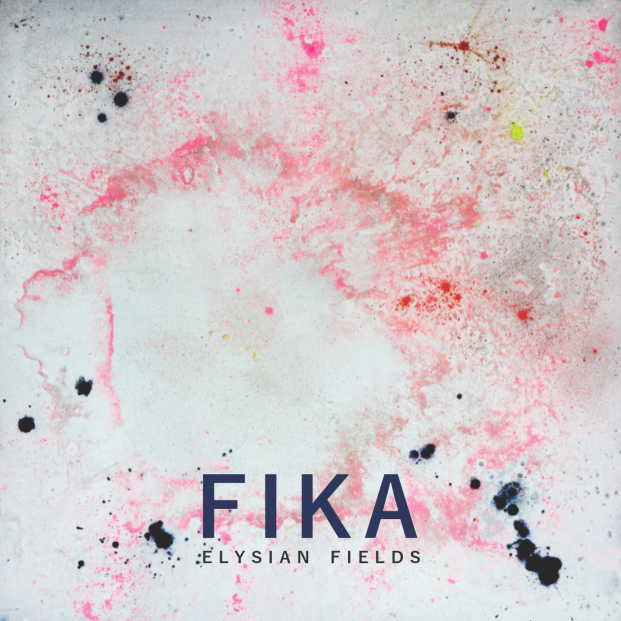 Fika (pron. ‘fee-ka’), is the latest recording from crossover ensemble Elysian Fields – beautiful music that plays and sings to the gathering of friends with food and fine conversation. The recording takes its name from the Swedish practice of fika: sitting down for coffee, conversation and pastries with friends and family. Elysian Fields is Australia’s… 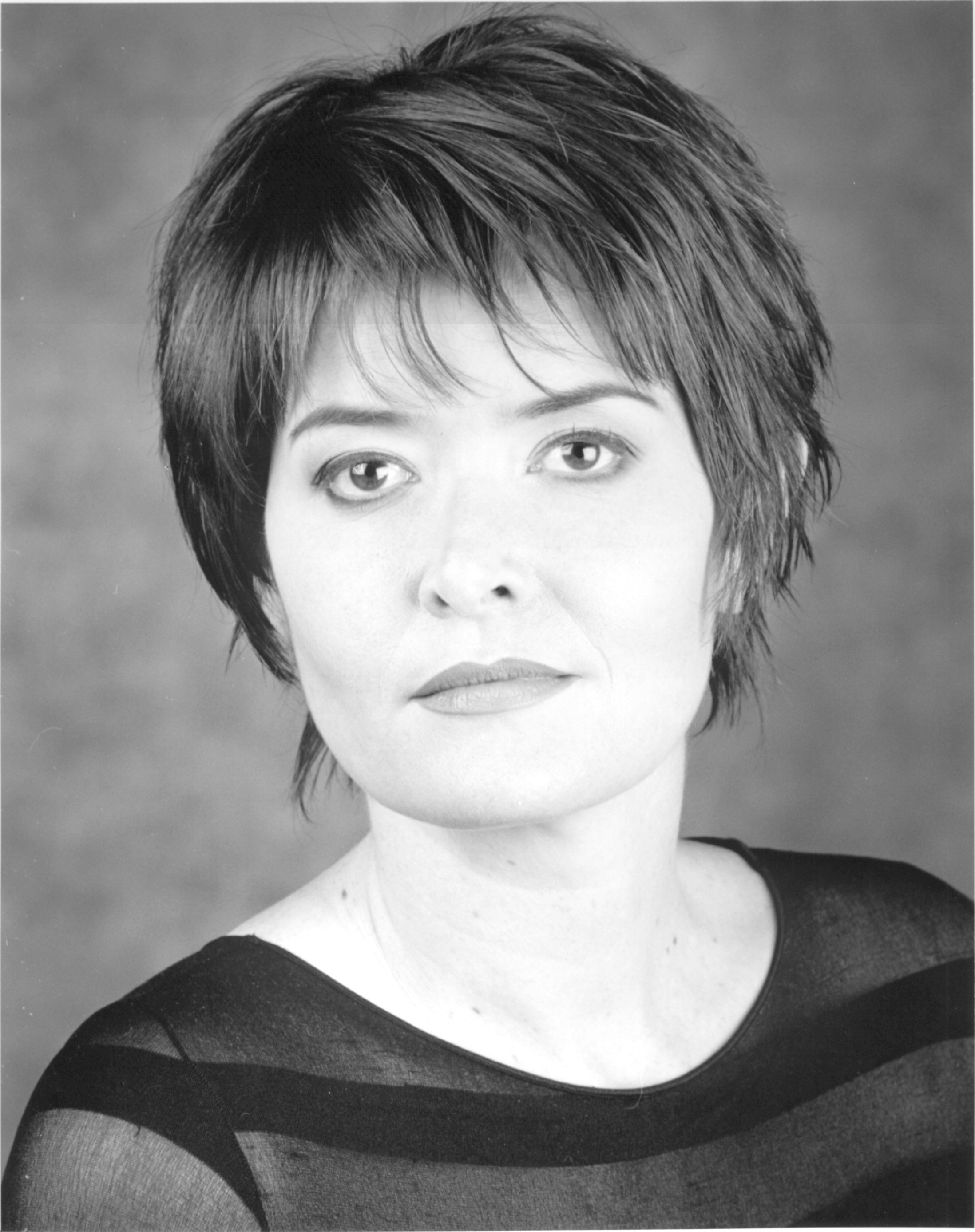 Catherine Carby, mezzo –soprano, soprano Leah Thomas and pianist Sharolyn Kimmorley perform a programme of Scandinavian art songs this weekend for Art Song NSW (see “On Wings of Art Song”).  The vocal repertoire is replete with works in French, German and Italian. Even Russian and Czech are regularly heard in opera and art song. But… 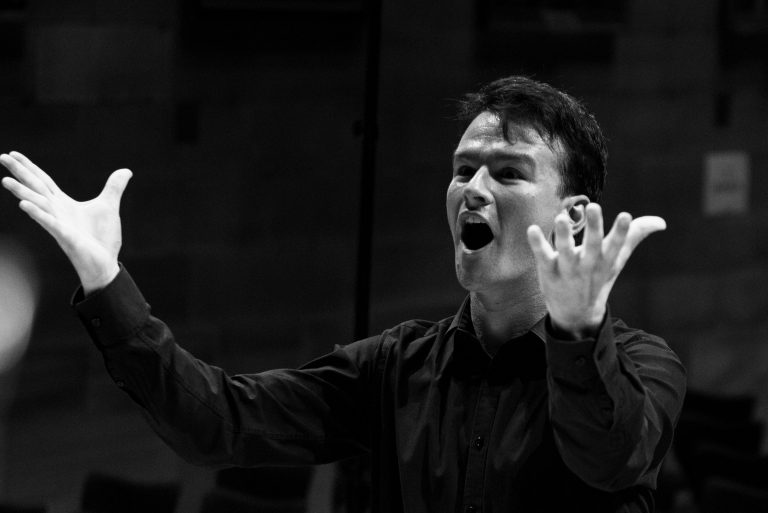 As we emerge from lockdowns, conductor Sam Allchurch shares what drove him to perform  ‘Garden of the Soul’ as the timely next concert of Sydney Chamber Choir, and his love for the music of Benjamin Britten. 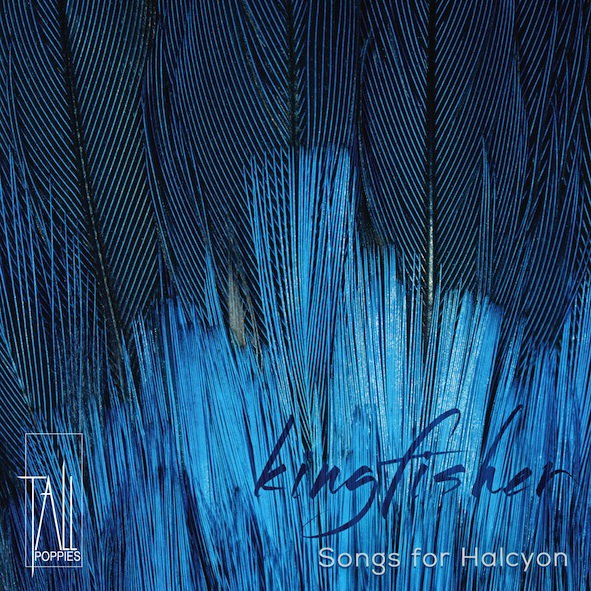 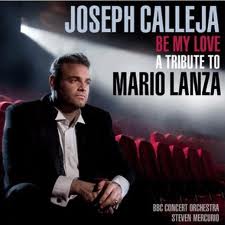 Tenor Joseph Calleja has turned his magnificent voice to recording the songs of Mario Lanza. Called Be My Love – A tribute to Mario Lanza, it’s the 4th solo CD for the 34 year old Maltese born lyric tenor. Due for release in mid-September under the Decca label, the music on the CD is inspired by the… 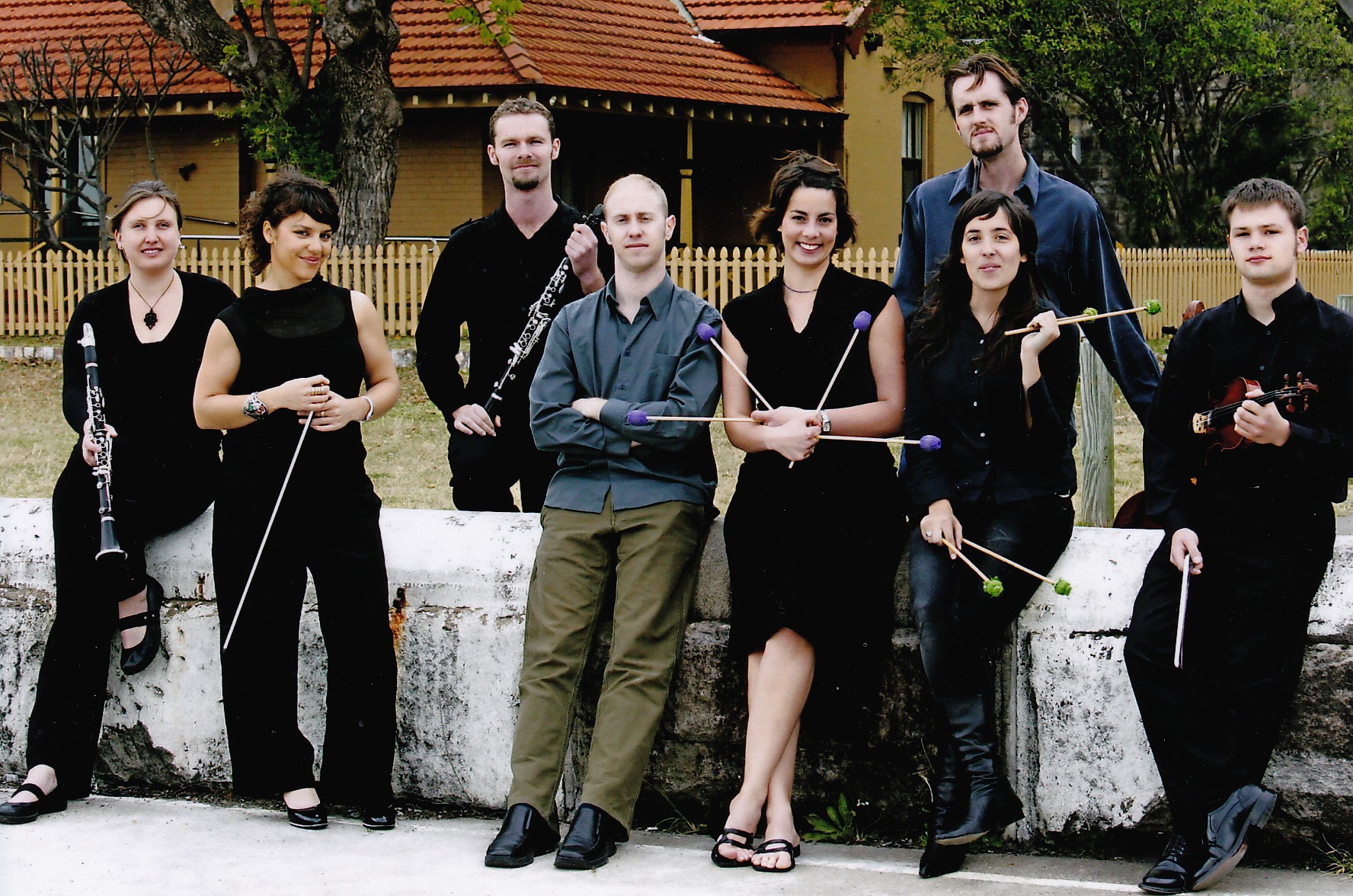 It was the year that the ANZAC bridge was opened to traffic; Telecom Australia became Telstra, Paul Keating was Prime Minister and Bob Carr defeated John Fahey to become  Premier of New South Wales. Overseas, OJ Simpson was found not guilty of double murder and Braveheart won the Oscar for Best Film. The year 1995…